It’s taken a while to write this up as I’m not familiar with this style. For a better picture of this martial art check out the Wikipedia entry here or better yet, try it out yourself. I’ve also written a follow up piece with my own thoughts on this style here.

The names Arnis, Kali and Eskrima are all labels of the same family of Filipino weapon-based martial arts. Whereas the origin of the term ‘Kali’ is uncertain, the word ‘Eskrima’ and ‘Arnis’ are of Spanish origin – Esgrima which means fencing, and Arnes meaning armour. Consequently, practitioners of this style are referred to as Arnisadores, Eskrimadores or Kalistas. Arnis terms will the name used in this article. Along with other styles, such as Sikaran and the wrestling style of Dumog, these are labelled as Filipino Martial Arts – FMA for short – and are known for being highly efficient and practical. There seems to be some debate as to exactly how Arnis came to be, and to what extent it was influenced by foreign martial arts (such as Indian, Malaysian and Spanish methods of fighting with bladed weapons), but regardless of origin Arnis has developed further and been refined within the Philippines. Much like Chinas’s Kung Fu, there is a plethora of different styles within Arnis as it has spread and been adapted throughout the Philippine islands, of which there over seven thousand.

When the Spanish Conquistadors arrived in the 16th century they found the natives to be no easy pickings. In fact, Spanish explorer Ferdinand Magellan met his death at the battle of Mactan where the tribal chief Lapu-Lapu and his forces defeated the invaders. The Spaniards however returned with greater numbers and superior equipment, colonising the islands and naming it after King Philip II of Spain as Las Islas Filipinas (hence, the ‘Philippines’). With time, the Spanish came to fear rebellion and so the Filipinos were forbidden to wear full sized swords, such as the wave-bladed Kris and the two-handed Kampilan. As the practise of the native martial arts became forbidden as well, Arnis practitioners had to train in secret and also camouflaged the art within other cultural expressions such as the stick dance Sakuting or the mock fights that are part the traditional Moro-Moro plays. 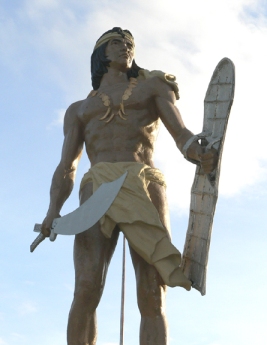 Later on under American rule starting from the early 20th century, Arnis was no longer banned. In fact, it was even encouraged by the authorities and so the old masters emerged and started spreading their art. What had been traditionally been taught within families and communities in a highly informal manner, now became more organised and was taught in groups in clubs and open spaces with more systemized training methods. However in spite of the acceptance from the authorities, Arnis was still rife with rivalries and animosity between groups. In an attempt to promote unity and cooperation, 12 masters came together and founded the school Doce Pares (Twelve Peers) in 1932, probably the most well-known Arnis organisation. This organisation is still going strong today, and several common styles have their origin in Doce Pares.

Arnis started to spread internationally with Filipinos moving overseas and bringing the art with them, however it wasn’t until the 1960’s and 70’s that teaches would start instructing westerners. Due to its effectiveness and versatility, many saw the value in Arnis’ teachings and there are now organisations all over the world. Within the martial arts community, FMA has a respected place – Bruce Lee himself promoted Arnis with his student Dan Inosanto. Unfortunately, Arnis is not as popular in its homeland in comparison to Taekwondo and Boxing, making obscurity its greatest adversary.

There is a strong no-nonsense mentality to all techniques – only what is practical is taught. This level of efficiency has been kept true through Arnis having been used in warfare, from before the Spanish arrived all the way through to WWII, where a special company was formed with individuals highly skilled in bladed weapons. Currently, knowledge in Filipino fighting arts is mandatory in military training in the Philippines and appears in American and Russian (Spetznas) army training as well. 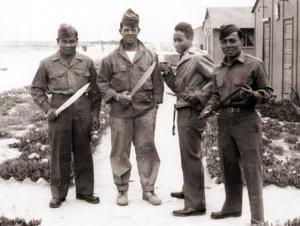 Members of the Bolo Battalion with their namesake blades

There is also a long running tradition of duelling in Arnis where fighters would challenge each other to settle disputes, make a name for themselves or simply to see who’s better. In the old days – up to some not-so-old days – Arnis duels would take place with no protective gear and with sticks made out of hardwood, these fights were referred to as Juego Todo. For supernatural protection, fighters would sometimes wear talismans (called anting-anting) or certain prayers (orasyon) which are believed to provide blessings such as turning aside strikes and bullets, make the bearer immune from pain or stop a knife thrust. Although a wooden stick may not sound like much, in the hands of a skilled arnisador it can break bones and crack skulls so severe injuries were common and deaths far from unheard of. According to the wiki page, duels are nowadays illegal “to reduce legal problems that arose from injury or death”. Seems the paperwork involved got too serious for the authorities involved.

Although the trademarks of the art is the use of single and/or double sticks, Arnis schools may also teach the use of the knife, sword, staff, empty hand and a number of other weapons such as the bullwhip. Rather than having separate techniques across the disciplines, Arnis focuses more on angles and directions of its attacks and blocks. Due to its straightforward principles in how techniques are applied, the teachings can easily be used with a number of improvised weapons such as rolled up magazines, screwdrivers and even a sarong.

In terms of the actual execution of the techniques, Arnis normally contains basic strikes delivered from an upright or partly kneeling guard position. Strikes are either circular or linear and may appear in any order, from any angle. In addition, there is a high level of fluidity and speed in the techniques that results in a seemingly never-ending barrage of attacks. This is due to the dual nature of each technique; what appears as a block can also be a strike, and vice versa with each move being a setup for the next manouver. Whilst most attacks are similar to bladed weapon techniques (that consider the angle and positioning of a blade’s edge), other techniques are strictly stick-based – such as the abanico (Spanish for fan) strikes, where the wrist is flicked in a 180 degrees motion to generate a relatively powerful attack without much movement of the arm, making it hard to defend against. There is also a myriad of disarming and locking techniques in Arnis, with differing levels of complexity.

My own personal stash – hardwood sticks that are used in duels, padded sticks for competing, rattan stick for practise along with Kris and Bolo knives.

In contrast to most other martial arts, Arnis students are trained in weapon use from day one (rather than spend years of basic training before you get to practise with weapons). Normally, it is only once you have had training in handling the stick and knife that you move on to learn the empty hand techniques. The reasoning behind this is to empower the student, as well as develop muscle memory and coordination. When using two weapons (either double sticks or stick and dagger) each piece is performing a different technique – this makes the arnisador ambidextrous and cultivates a higher level of situational awareness. Even with just one weapon, the opposite empty hand is still just as active with checking, blocking and disarming the opponent – this is called the ‘Live hand’ concept, and can be found in Kung Fu as well.

The Live Hand is heavily featured throughout this demo

Footwork is normally based on a triangular pattern, with the feet on two points of the triangle and moving to the third. The position and distance between the feet varies depending on what the situation requires. Leg attacks in Arnis are normally low, with kicks or stomps aiming to disrupt the lower part of the opponent by targeting areas such as the groin, knees, ankles and feet.

In spite of being part of Filipino culture for centuries, it wasn’t until 2010 that Arnis was recognised and proclaimed as official National Martial Art and Sport of the Philippines. This could be due to the fact that Arnis wasn’t a ‘sport’ per se until the 1970’s, when the first official Arnis tournaments (using protective gear) were organised. These competitions have grown and spread with the art, and nowadays the World Eskrima Kali Arnis Federation (WEKAF) holds the World Championships in the city of Cebu every other year. Fighters wear headgear similar to fencing or kendo masks and either fight with padded sticks and some basic body protection, or with ‘live’ rattan sticks and heavier padding depending on what rule system you’re competing in. There is also a category for pre-choreographed patterns (similar to katas and forms) called anyo.

Nowadays, Arnis is part of the Filipino school curriculum and appears in the sports of the annual National Games of the Philippines since 2010.

7 thoughts on “What is Arnis/Kali/Eskrima?”