The part of my story where I am finally able to return to where I belong – and doing so in style. Sort of.

After having suffered a knee injury and getting a handle on parenthood, finally things were turning around – after not being able to do any martial arts training for such a long time and pinballing between physios and specialists that could not help me, I found myself at the office of a Dr Kuoh. I told him my story and the nature of my knee issue, and to my amazement he found the issue straightaway. A quick test confirmed that the problem was that my kneecap wasn’t tracking right and so it was grinding bone on bone, which caused the swelling. By taping the knee I could move again, not to the extent of my former capability but with some rehab it’d be enough to take up Kung Fu again! Obviously this was a major turning point and did wonders for my struggling passion (although I suspect for Dr Kuoh it was just, you know, Tuesday).

What came next was busy times, as I did my best to fit the rehab in with all the challenges of parenthood. After a couple of months I was finally able to take up training again, having been exiled for 1 year, 3 months and 14 days (but who’s counting). As that was my longest break ever, it is perhaps understandable that I completely overdid it in the first class and was sore for days afterwards. But nonetheless, I was back! The taping wasn’t a perfect solution, but as long as I didn’t jump too much or kicked too hard I was able to keep up.

After revisiting the old forms and shaking off the rust in terms of techniques, I was taught how to handle the Kwan Dao – a Chinese halberd, first wielded by the legendary General Kwan (the name ‘Kwan Dao’ literally means Kwan’s Knife). I had been looking forward to learning this for a long time, as I had a feeling the Kwan would be my favourite weapon so far. I even went so far to buy a Kwan Dao of my own, and personalised it by adding some leather details and inscribing Viking runes on the shaft, truths and quotes of wisdom and fortitude.

Thing of beauty, she is

Thinking about the old times made me pull up the website for the All Styles tournaments I had competed in before I got injured. As it turned out, the year’s final qualifying round was next weekend so I suggested to my friend Nick (one of the newer instructors at my school) that we could try it out. So we went, and got medal placements in both categories of Empty Hand Forms as well as Weapon Demonstrations. Having caught the competitive bug, we started training for the State Championships and again found ourselves with an armful of trophy loot. In particular, the  Weapons category was a solid challenge as it had no less than 18 competitors, pitting staff-wielding Karateka and Kobudo swordsmen (and women) with their signature Katanas against Kung Fu practitioners from different schools, showcasing steel whips, combat fans and broadswords. I was almost tempted to challenge one of the Kobudo students to a duel, as standing amongst the others – with everyone carrying their weapon of choice – was such an unusual situation (just imagine the fight scene it would have made, best bar brawl ever). When the dust settled, I found myself in 1st place – I was State Champion! At least, in the category that mattered the most to me.

Obviously I could not resist setting up a montage

After the State Champs, there was some waffling about whether we should go for the Australian National Championships, as it would mean travelling to Queensland. But eventually we decided that we’d go, as closure is good for the soul. During all this I was becoming increasingly familiar with my Kwan Dao, finding my own flavour within the form and learning how to make the most of it. It was not all sunshine and roses though – the weeks before the training became intensely stressful as several aspects of work, personal life and being a father all came together to put some serious pressure on me. But finally I found myself on the plane to Queensland, somehow successful in getting a giant freaking halberd through airport security. They did take my nailclipper though, the bastards.

As chance would have it the National Championship was on during the final weekend of what Australians refer to as Schoolies Week, which is sometimes referred to as ‘a pilgrimage and rite of passage from adolescence to adulthood’ for high school graduates through a symbolic plunge into the ocean, representing the liberation from school and transition to the freedom of adulthood. In reality, it’s a week long binge-drinking fest with teenage stupidity and ‘adventures’ galore (make of that what you wish). To save money I had booked myself into a hostel’s shared dorm, which is how I found myself squeezed in with schoolie revellers and a couple of American soldiers on leave from Afghanistan. As I was interested in the soldiers’ story, I struck up conversation to get some first-hand accounts of how life was like in their world. Something that ended up severely hurting my beauty sleep.

Bad mistake. That late night was apparently the drop that made the cup run over, and so I was now paying full price for all the other late nights and stress by suffering a pounding headache, so strong that it was making me nauseous. Although I wanted nothing else than to spend the day in bed bemoaning my cruel fate, I dragged myself up and joined my friend Nick (who was looking disgustingly perky and pumped). Unsurprisingly, it turned out to be a very long day.

Can we please get on with this? Guys?

After the opening ceremony we eventually got to the empty-hand forms category, where I got to watch my friend Nick tie for first place with a pretty talented Karateka. After a second run, a narrow margin gave the victory to the Karate practitioner. For my own part, I was happy to find myself in third place – but more impressively, I was still on my feet. At this point I wanted nothing more than to lie down and wallow in self-pity, but fortunately there was only one more thing to do; next up was the weapons category. While the others were warming up in a flurry of whirling staffs and slashing swords, I was at the far back, silently pounding my head against the wall whilst telling myself to hang in there. As it turned out, the headache might actually have worked in my favour as the pain made me put my full focus into my form. The judges probably took my facial expression as ferocious fighter spirit and were impressed with my speed and power… little did they know I was just trying to get through it all in one piece, the sooner the better! I hadn’t kept track of the scores, so I was utterly relieved (and somewhat surprised) when then announced me as the Australian National Champion in Traditional Weapons! Evidently my kwan and I had triumphed in the end. Nick was also successful, securing a well-deserved 2nd place with his Single Broadsword form. 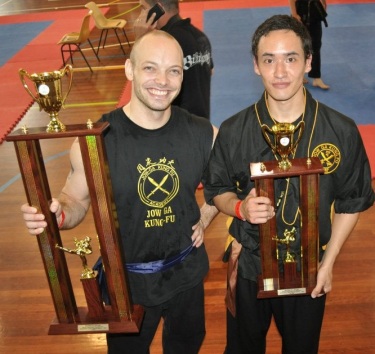 The very image of relief and happiness

This was certainly a new experience to me. Even though I had been training for years and years, overcome challenges and risen through belts, I had never ‘won’ anything. Being a ‘winner’ was a foreign concept, as I had only been trying to better myself – aiming for perfection, rather than thinking of terms such as winning and losing (as that mindset tends to label people as either winners or losers, which is not the most healthy way to see the world). If anything I would consider myself as a loser, but this changed that perception. Only to a degree though, because this did not change anything in terms of why and how I love martial arts. The reason for competing had been to put myself out there, outside of the comfort zone of my own school to see if I could stand up to the pressure of being judged against others. Having won was a great indicator that I had met the challenge, but most importantly I had been able to perform on a good level at all times, in spite of any opposition, nerves and stress.

But who are we kidding – having a trophy as long as my arm and a national title to my name was still pretty damn cool!

2 thoughts on “The Lobo Chronicles, part 10 – From Chump to Champ”