How I got interested in Martial Arts and my first period of training – and crushing defeat.

Looking back, I was a really physical kid. As in, really physical – I taught myself how to cartwheel when I was five, based on the pictures in a dictionary for kids. When I wanted to be alone, I would climb the 20 meter tall conifer tree on our front lawn. At age 10 I could cartwheel across a soccer field (without throwing up) and around that age I also taught myself how to do a kip-up from watching action movies.

A kip-up. The dumbest way you could possibly get up – but chicks dig it.

Unfortunately I also had quite the temper, which some kids at school would use to taunt me into fights. Got so bad that my mother had me enrolled in another school, where there was less bullying (still got into fights though). And make no mistake – I lost most fights, as I was most often smaller and younger than the other guy and sometimes outnumbered. Excuses, right?

I remember exactly when I first got wind of martial arts. I was at a friend’s place and this other kid* was explaining something to my friend, and he was talking about all kinds of awesome kicks and attacks. I asked him to explain what he was talking about, and he demonstrated a pushing sidekick (fun fact – that turned into my favourite kick and is still one of my strongest attacks). It was the first time it occurred to me that I could actually try to learn those cool things I had seen in movies! I had to do it. After pestering my mother for ages to let me try this ‘Tae Kwon Do’ thing, my older brother eventually stepped in and volunteered to cover my initial training fees which won her over.

I owe my brother many thanks, kudos, props and cred for that early support

I’d bet good money she came to regret that decision! I soon got the hang of the basic kicks and was always playing around with it – “fighting” bushes and trees in our yard during summer, and moving the action to the lounge room in wintertime. I soon realised that I could kick higher if I stretched, so I stretched everyday whilst watching way too many action movies. After a few months I was able to do full splits both front and sideways. I was also informed that if I wanted to train, I would have to stay out of fights. Any violence outside of training would lead to me being kicked out (get it? “kicked out” of Tae Kwon Do?*b’dom tish*). 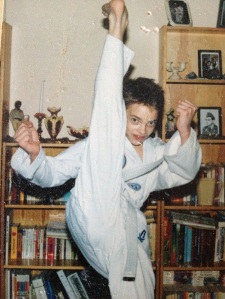 The training was very new to me. Before this I had tried a couple of sports (in Sweden, learning to play soccer is mandatory) but nothing had stuck. In Tae Kwon Do I was introduced to the structure, discipline and respect that I’ve come to find in almost all martial arts since. Standing in rows drilling sequences, memorising poomses (set patterns of techniques), getting used to the concept of handling attacks without going berserk… Whenever practise was on, the local school’s gym hall changed from being a play area to a training ground so sacred, you would bow to the place itself before you even got through the door.

Eventually my very first grading came, and I lined up with the other white belts… but in the end I crumbled under pressure, as I was intensely nervous and couldn’t understand the broken engrish of the Korean master who came to grade us (come on, I was 12 and a half at that point). I had failed. Not that I lacked the skills, I just couldn’t perform on the day. I was devastated, and there was no end to my misery. When training resumed after the grading, I was stuck with the new white belts and had to do the same basic drills I had done for months whilst everyone else got to learn cool new moves. So, being just a kid, I grew bored and quit.

But one day I would return!

Oh and for the record – in all the years since, I have to this day never failed another fucking grading.

3 thoughts on “The Lobo Chronicles, Part 1 – Crash and Burn”